So, my day was fun.  As mentioned yesterday, both my pc and my laptop decided they didn’t want to work anymore.  I’ve had computer problems in the past (who hasn’t?) but always just one computer at a time.  This is the first time that more than one ganged up on me at the same time.

After running virus scans, malware scans, registry cleaners, disk checks, a system file check and scrolling through a few hundred entries in the system log I finally found the problem.  Turns out it wasn’t Microsoft taking revenge after all, but the latest update of the program I got from my bank’s internet banking site supposed to protect me against malware and phishing attacks.  Unfortunately part of the ill effects of this update was that it made the computer freeze every time I tried to uninstall it and system restore wouldn’t work either (and in case you didn’t know, you can’t uninstall programs in “safe mode” as the installer doesn’t run there). 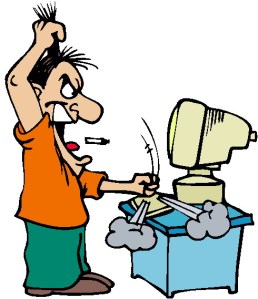 I was weighing my options between doing a clean re-install (which would have meant wiping my hard drive and starting from scratch), taking the pc in to the shop for a repair install (which I can’t do as I don’t have a retail-disc of Windows but only the one that came pre-loaded when I bought the pc), or performing a bit of percussive maintenance by invoking the title of my blog, when I came across  The Windows Club.  They had the answer in the form of an application that could activate the installer from within safe mode and I was finally able to uninstall the offending program.

I am very glad to report that since 12 this afternoon neither my pc or laptop has crashed once and I haven’t had to test whether or not a laptop and desktop pc fall at the same speed when dropped from a fourth storey window.

I still think we should be careful what we say online about Microsoft, though.  I honestly believe they’re way more powerful than the world’s governments and a much bigger threat to privacy than PRISM.

Speaking of PRISM, click here for something funny.  I promise your IP address will be recorded and immediately forwarded to the US Department of Homeland Security along with a photo of you taken by your webcam.