I just read the first two Dresden Files novels back to back and thought I’d try a joint review on them.

Storm Front introduces us to Harry Blackstone Copperfield Dresden.  Dresden is a professional wizard who lives in Chicago.  He is also a private detective and consults with the Special Investigations Unit of the Chicago Police Department on more unusual cases.

In Storm Front someone has been murdered with magic, the most serious and unforgivable crime among practitioners of the craft.  The White Council (the guys who make sure no one misuses magic) suspects Dresden of the crime and his death sentence is all but issued.  Meanwhile Lieutenant Karrin Murphy has asked for Dresden’s help to catch the real killer, not knowing that helping her could provide exactly the evidence the White Council needs to put him down once and for all, and with their enforcer, Morgan, hounding Dresden’s every step the risk is great indeed.

To make things worse, “Gentleman” John Marcone, Chicago’s crime kingpin, is leaning on Dresden to back off from the investigation.  There’s also a vampire involved.  Throw in an acid-spitting demon, a talking skull and a love-potion mix-up and you have more than just lightning to worry about as the storm rises on the horizon. 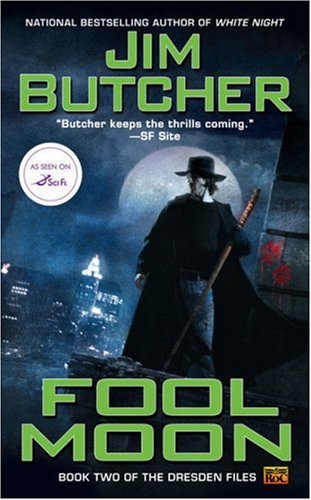 Fool Moon takes place a few months later.  There has been another gruesome murder, and this time a werewolf is suspected.  But Murphy doesn’t trust Dresden like in the past, the FBI are also sticking their noses into it, and Marcone is also on Dresden’s case.  Dresden manages to make enemies faster than a Republican at an environmentalist convention while the full moon rises and werewolves run rampant in Chicago.  And apparently the thing about silver bullets is just a myth (in a world where wizards and werewolves aren’t).

I enjoyed both books, though if I had to pick a favourite I’d go with Fool Moon.  On the one hand I think it’s because I first had to get used to the character, but also to the narrative voice and writing style.  On the other, I think it’s better written.  The writing is tighter, the pacing is faster, the odds stacked against Dresden are greater.  Butcher also goes into more detail on the magic system and significantly fleshes out the main character from the first novel.

I’m really growing to love Harry Dresden.  An explanation why really warrants a separate post, but from a writing point of view Butcher has created a very rounded character.  Dresden is incredibly powerful, but he has very real limits.  Sometimes he pushes those limits, and then he has to pay the price.  While he’s good, he’s not a nice guy and he has a very definite dark side he constantly has to struggle to control (just like my other favourite literary character, Sam Vimes).

The two main supporting character, Murphy and Harry’s love interest, reporter Susan Rodriguez, are also turning into round characters, shown very effectively through their respective relationships with Dresden.  Marcone is a bit more one-dimensional, but fate seems to keep throwing him and Dresden together and I’m looking forward at how the character will develop in later novels.

I also noticed what might be a theme developing in these two novels, namely that of secrets.  Dresden has a lot of them.  As the most powerful wizard in one of the world’s biggest cities, and a world that doesn’t want to believe in magic at that, he has to keep secrets, even from himself.  But relationships, based on trust as they are, can’t thrive in the midst of secrets and in both these novels that creates problems for him.  It also doesn’t help that many of those secrets he has to keep, whether he wants to or not.  This, along with his dark past, is the central conflict in these novels, making it much more than just thrilling adventure.

To summarise, if your tastes lean towards Literature (with the capital letter), then Dresden won’t do it for you.  But if you’re looking for a fast-paced adventure with a likeable hero facing incredible odds, that won’t let you put it down and is a bit different from just men with guns, then you don’t have to look any further than Jim Butcher‘s The Dresden Files (though Dresden has a gun – a .38 special – cause sometimes magic just isn’t enough).