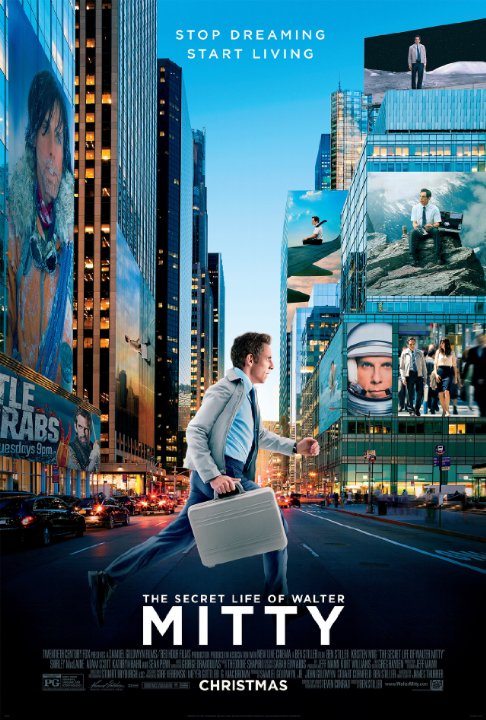 When I saw the preview for The Secret Life of Walter Mitty my first thought was, “Not another Ben Stiller film.”  (I feel the same way about him that most people apparently feel about Adam Sandler – I’ll grudgingly admit he had made a couple of good films, but most of the time he just irritates me.)  However, thirty seconds later I was, “I’ve got to see this movie!”  It did not disappoint.

The film is based on the short story with the same name written by American author James Thurber in 1939.  Thurber’s Mitty is an elderly gentleman driving his wife to the hairdresser’s.  During the trip he has five episodes where he daydreams that he’s busy with something else.  Specifically, in each daydream he is someone doing something exceptional, each time inspired by the mundane activity he’s performing in the real world.

The film’s Mitty (played by Stiller) is a negative assets manager (the guy responsible for film negatives at a magazine…for my younger readers, film is what we used before SD cards) at Life Magazine (actually modelled on the real Life Magazine which shut down in 2000 and then transitioned to the online world after a brief revival between 2004 and 2007).  Like the character on whom he is based, Walter constantly daydreams about doing extraordinary stuff, while in reality his life is so boring his online dating profile is flagged as broken because it is so empty.

We meet Mitty just as the magazine is making the transition to digital.  This necessarily means downsizing and lots of stress for all the employees.  In the midst of this Mitty receives a roll of film from adventurer/photographer Sean O’Connell (Sean Penn) which contains, according to a message from Sean, the cover photo for the final edition of Life.  Except, that photo is missing, and the executive responsible for the transition (played by Adam Scott) is hounding Walter for that photo.

Mitty sets off in search of Sean, with a little help and encouragement from his colleague and secret crush, Cheryl (Kristen Wiig), hoping to get a duplicate of the photo.  By the end of the film this dreamer who never did anything had jumped from a helicopter into the Arctic Sea, outran an exploding volcano and had cake with Afghan warlords, and had changed into a person with a new understanding and deeper appreciation of life.

Stiller is brilliant in his portrayal of Walter Mitty.  In the opening scenes he reminded me very strongly of Will Ferrell’s character in Stranger Than Fiction – a sad, lonely little man who lives in his head most of the time because his real world is so dreary.  As Mitty embarks on his journey we can see how he changes, little by little.  Stiller’s acting is never over-the-top, but his character is relatable and from the start you can’t help but root for him.

His fellow-cast members are equally brilliant.  Kristen Wiig and Stiller had some wonderful on-screen chemistry and Sean Penn, even though he only had a few minutes of screentime, made those few minutes some of the most memorable of the entire film.  I also have to mention Adam Scott, who manages to portray a character even more hateable than Stiller’s character in Dodgeball.

Stiller did an equally good job at directing the film.  It never loses pace and has a good balance of action, humour, romance and drama.  The locations are beautiful, the music memorable.  My only complaint is that even at 114 minutes it was over much too quickly.

It was clear that Stiller was trying to use the film to get a message across, a message contained in the motto of the fictional Life Magazine which is scattered throughout the film.  Yet the repetition doesn’t irritate or detract, but becomes a golden thread binding the film together.

To see the world, things dangerous to come to, to see behind walls, draw closer, to find each other, and to feel. That is the purpose of life.

8 thoughts on “KokkieH Reviews The Secret Life of Walter Mitty”