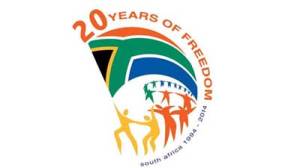 Today is South Africa’s birthday (well, one of them anyway, depending on which history book you read).  On this day, twenty years ago,  South Africa went to the polls for our first democratic elections.  Symbolically, it was the moment the people of SA attained freedom from oppression, thus it’s name:  Freedom Day.

Today is also my niece’s first birthday.  As she is the first grandchild in the family, it’s a pretty big deal (which probably means I’ll have to suffer through being congratulated again for something which is in no way my fault).

My step-sister had decreed that the theme of the birthday will be The Little Mermaid (the Disney version, not Hans Christian Andersen’s – that one’s just creepy, what with her dissolving into foam at the end and all).  In response the wife has made a fitting gift for the little one:

I am told my sister has also created a cake around the theme.  She’s an avid Cake Boss fan who has always had a talent for baking and have in recent years developed some wicked decorating skills of her own, so her creation promises to be something memorable.  I’ll most definitely post some photos, if not later today, then some time during the week.

Hang on.  Did someone say cake?  Be right back…

4 thoughts on “A tale of two birthdays”