Welcome to the first-ever instalment of Percussive Etymology. In this feature, which will initially publish once a fortnight, my trusty hammer and I will explore the origins of one of the many quirky phrases contained in the English language. 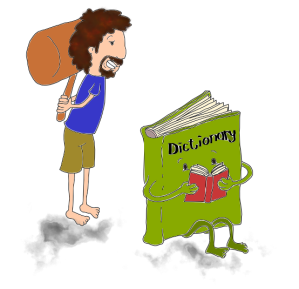 I’m kicking this off with the phrase, “Gumming up the works”. Why? Because a couple of weeks ago the phrase, along with the idea for this feature, simply popped into my head while I was in the shower. Some people sing in the shower, some solve mathematical formulae, I think up wacky blog ideas that will probably not survive until the end of the year.

Got your hammer?  Then hold on tight!

Gumming up the Works

In the 1800s in North America sawmills were powered by waterwheels, and later by steam. This was more than sufficient for running the circular saws used to cut lumber into beams and planks.

But problems arose when working on trees with a high sugar content in their sap, like maple, eucalyptus and pines. While sawing up the trees the sap would run out, coating the blade and machinery driving it. This was fine as long as everything kept running, the heat from friction keeping the sap liquid.

However, in the evenings the saw would stop spinning, the gears would stop turning and as everything cooled down the syrupy tree sap would congeal into a thick, sticky mess.

Usually when the mill was started up again the next morning the machinery’s torque would be sufficient to overcome the restrictive nature of the tree syrup, but sometimes, especially in colder weather, the sap would become a gooey substance, preventing anything from moving, or gumming up the works.

Fixing it would involve pouring large quantities of boiling water over the machinery until the tree sap was sufficiently dissolved for the gears to start turning again (resulting in significant losses in time and productivity), whereupon the heat generated by friction would take care of the rest.

An alternative theory revolves around one Mr Wilson who lived next to a church in Swindon. After a very successful fundraiser the church installed a new mechanical clock in the tower which rang out a melody every fifteen minutes.

Everyone considered the new church clock a wonderful novelty, except for Mr Wilson who had to endure a loud clanging in his ears every quarter of the hour, day in and day out. It was enough to drive a man insane.

Minutes of church board and town council meetings record his various attempts to silence the melodious clock with no success. At one point his petitions finally stopped.

What happened next is not entirely clear. The general dealer later reported that Mr Wilson, who was so set in his ways that in twelve years he had never changed his weekly order for groceries, started coming in twice a day to buy a packet of gum. This puzzled the shopkeeper, but he simply assumed Mr Wilson had developed a new eccentric habit, as those who live alone are prone to do.

This went on for about a year, until Tuesday Mr Wilson did not visit the shop for his daily first packet of gum. It wasn’t until eleven-forty-five that anyone noticed that the church clock was not sounding its quarterly melody. On investigation it was discovered that the clockwork mechanism had been completely gummed up by chewing gum.

Naturally, fingers were immediately pointed to Mr Wilson, but aside from his year-long twice-daily chewing gum habit, which was circumstantial at best, there was no way to prove that we was, in fact, responsible for gumming up the works.

What is certain was that he got back his peace and quiet. A master clockmaker was flown in from Switzerland and declared the clock irreparable. The church board decided another fundraiser for a new clock could not be justified while there were so many people going hungry in Africa and no melody issued from that tower again until the day of Mr Wilson’s death.

I hope by now you’ve figured out that this is completely made up. Please don’t cite this as a source for your etymology paper. If you do I take no responsibility for your grades.

If you have a phrase or expression you want me to use for a future edition of Percussive Etymology, tell me in the comments.  If you know the real etymology of the phrase “gumming up the works”, please share.

Image courtesy of The Wife.

10 thoughts on “Percussive Etymology – Gumming Up the Works”