There is nothing like your first wheels. Getting a car is both one of the first true tastes of independence – how glorious to no longer have to rely on parents and friends to get you want to be – and one of the first true burdens of responsibility – both that of maintenance and that of not killing other road users. 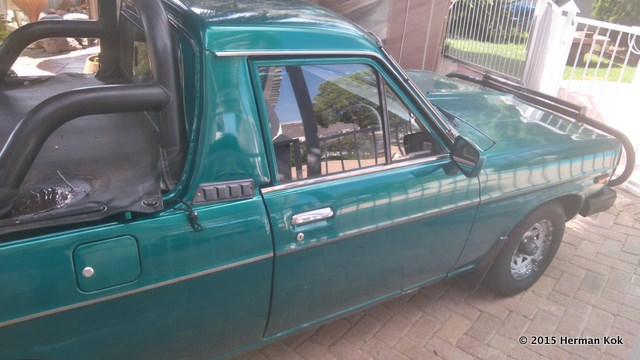 I got my bakkie (diminuitive of “bak”, the Afrikaans for “bowl”, but actually referring to a pickup truck of any size up to a three ton load capacity) in August 2005.

I had recently returned from a failed attempt to seek my fortune in the glorious queendom of Londinium and had started my first job as youth worker at my local church. My dad, knowing I wouldn’t be able to afford a vehicle on the peanuts they were paying me, gave me his 2000 model, 1.4 litre Nissan bakkie. It had 65 000 kilometers on the clock.

For the past ten years my bakkie got me where I needed to go. The 80 000 kilometers I put on it included numerous trips to the seaside, several moves, and a couple off-road adventures – one on a quad-bike trail (I only realised it was a quad-bike trail when it was already too late to turn around…it was a week before my wedding…the adventure cost me a spedometer cable) and one on a mountain pass where a four-wheel drive vehicle would probably have been more appropriate (I didn’t tell my bakkie this, and in its ignorance it handled itself quite well).

I worked it hard, and it had numerous dents and scratches from all the youth camps and school functions where it’s ability to keep going with a full load had been repeatedly tested to the limit. In all that time I replaced the shock absorbers and brakes once, I rarely had to add oil between services (it never leaked), and I replaced the battery four times. It ate batteries.

It gave excellent mileage, it could parallel park backwards and forwards in the smallest of spaces, it was cheap to maintain and it was my first car.

And last week we took our last trip together.

As I mentioned in my last post, I’m becoming a dad in seven months, and a two-seater 1.4 litre pickup does not have room for a car seat (people frown on it if you transport your infant in the load bed, or so I’m told), so the wife and I decided to upgrade to a safe and sensible family vehicle with a big enough boot to take a stroller, and collapsible crib, and a diaper bag, and a foot locker full of toys, and a kitchen sink, and another foot locker to put the kid in if it won’t shut up, and…what was I saying?

And while it’s exciting to have a new car, it was tough handing over my keys to a complete stranger and watching him drive off with my first wheels.

I never did get around to giving my bakkie a name. And I never turned it into a bakkuzi…

2 thoughts on “My first wheels”