Writing about the demise of the Blackberry got me all nostalgic about the various phones I’ve had over the years.  Let me share them with you.

My first cellular phone was a Nokia Brick.  Okay, so its official model was the 2110 (though I instantly got a photo of one when I typed “Nokia Brick” into Google).  I also had the extended battery which, as you can see, very nearly doubles its thickness (and which, at four days, lasted twice as long as the original battery (and four times as long as my current smartphone’s…go figure)).  It not only had an external antenna, but you had to extend it to get decent signal most of the time.

It could call and it could send text messages (it was actually the first phone ever that could do that) of a maximum of 120 characters (and you thought composing a 140 character tweet was challenging).  It had no camera.  It couldn’t surf the net.  It couldn’t e-mail, or facebook, or tweet (but the last two weren’t invented yet, so we can’t really blame the phone for that).  It didn’t play music, except for the pre-programmed, single-tone ringtones (which included the very first version of the Nokia tone).

However, it did serve a dual purpose as a weapon for self-defense.  I called it a brick.  I wasn’t referring to the shape, but to the size.  Maybe this comparison will help: 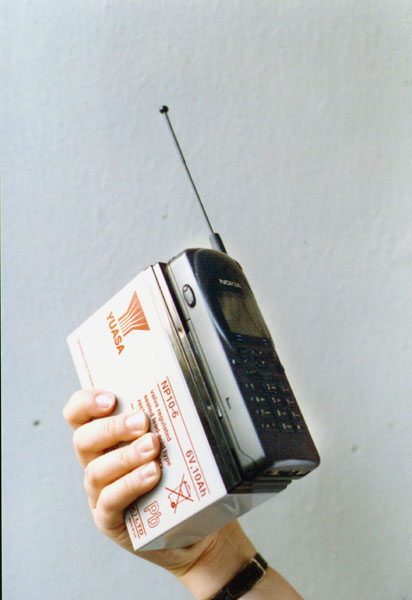 As you can see, this was a fairly large phone.  You couldn’t slip this behemoth into the pocket of your skinny jeans.  In any case it was so heavy it was liable to pull your pants down to your ankles.  I developed quite strong arms from lifting it up to my ear for two years.

One felt safe walking down the street with this phone in your hand, as would-be muggers would melt back into the shadows upon spotting it, knowing it to be much more destructive than the crowbar or baseball bat they were carrying.  Combined with a good throwing arm (so I’ve been told) one of these could bring down a cow.  (Interestingly, according to Wikipedia it was considerably smaller than other phone models of the time of the same price…don’t think I want to see the others.)

My dad gave it to me when I left high school at the end of ’99.  I was doing a gap year with a volunteer organisation which included being on the road a lot and he wanted an easy way to stay in touch with me (or he upgraded and felt bad about throwing it away knowing it would quadruple his carbon footprint at that time (though that was before we discovered global warming, so probably not)).  It served me faithfully through my gap year and most of my first year in college (where it spent most of its time lying in my closet) until my dad gave me a new phone for my birthday.

In terms of size and weight the 3310 took some getting used to (I often started to panic that it had been stolen if I couldn’t feel it’s weight in my pocket) but it was no less formidable a phone (as the many, many internet memes can attest – just run a Google image search).  It could still only phone and text, but it allowed you to string up to three text messages together and it had monochrome images, animations and two-tone ringtones (you could even compose your own).  It had games…four of them.  It could go two weeks on a single charge.  It served me faithfully for several years (going through two batteries in the process), including a few months in the UK.

The 6230i was my first camera phone.  I got it on contract when I started working.  This one doesn’t really belong under antiques as, barring a few refinements and new innovations, it could do pretty much everything most phones can do today.  It could surf the web (albeit in very limited form), it had a calendar and media player, bluetooth and infrared, downloadable themes and came preloaded with a number of apps and games.  Like its predecessor it also had excellent battery life.

The reason I’m including it here is so you can see the contrast.  Scroll back to the brick.  That was in ’99.  This last one?  2005.  In just six years the technology went from something you could use to beat livestock to death to something rapidly approaching an office/media centre in your pocket.  In fact, higher-end models of that year could already be considered just that, their functionality probably making them the first “smart” phones (though it would still be a few more years before they were called that).

3 thoughts on “On my phones over the years – The Antiques”