…but in fact it was a big-ass pickup truck with an even bigger ass inside of it who thought he could still make it through the traffic circle before the oncoming traffic. What makes him an ass is the fact that he did not include the car in front of him, the driver of which had already decided to yield to oncoming traffic, as both the law prescribed and a healthy sense of self-preservation dictated, in his calculations. 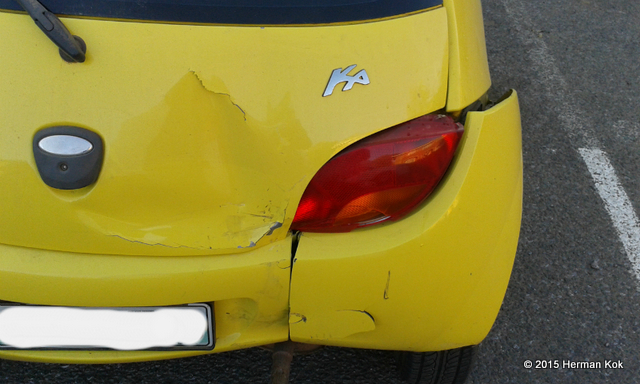 One would think a canary yellow car is easy to spot in traffic. Apparently it is invisible right until the moment you plough into it.

The wife, thankfully, is okay, though she spent most of the morning in tears from the shock and whiplash combined with scoliosis doesn’t help much.

I’ve already submitted a claim to the insurance, and I’m desperately hoping they don’t write it off (a strong possibility as the car is already ten years old and there’s damage to the actual body as well behind the cosmetic damage here) as we simply can’t afford to replace it, what with me still being unemployed and all. If you’re at all into praying, please pray that the insurance pays to fix it. Or the other guy’s company (as it was a company vehicle and apparently they don’t have insurance on their vehicles; I’m still waiting to hear back from them).

Yeah. I’ll stop now, as the rest of what I want to say isn’t suitable for publication…

9 thoughts on “Tweety tawt he taw a puddytat…”