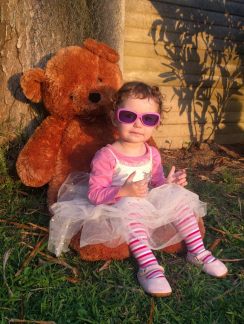 When did that happen? Really, when? Just the other day she was still falling asleep, her entire little body curled up on my chest. Now she’s a freakin’ toddler, speaking, and toddling, and imitating everything we say and do. This is going too fast.

I haven’t done one of these in a while, so let me catch you up.

We had a move last year. She handled the packing and the move like a trooper, including the three weeks we had to live with the in-laws (don’t ask), and settled into her new home as if she’s always lived here. Around that time she figured out the bum-shuffle. The saying goes you need to drag yourself across the floor on your behind before you can walk, after all, doesn’t it?

At first she was not crazy about the beach. That didn’t last long. Now we’re at the point where she asks whether we’re going to the beach whenever we get into the car. She loves the sand and loves the ocean. Any water. Keeping her away from the pool is impossible. Thank goodness for a net.

She loves the outdoors, in fact. She knew how to distinguish a gecko from a skink before she knew the difference between a cow and a sheep. Our first camping trip was a great success. She can identify several birds by their calls and I live in constant fear she’s going to try and make friends with a monkey or bring home a snake.

On 21 October last year she stood up on her own, without holding onto anything, for the first time. She promptly applauded herself. On 22 November she took her first steps, walking three steps at a time back and forth between the missus and me. 21 December we were doing the same, and all of a sudden she took of and started running around the dining room table. We haven’t been able to get her to stop since. 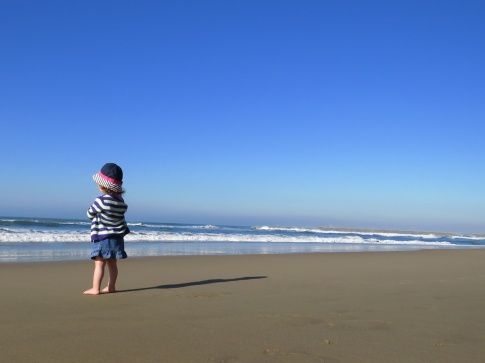 (She did figure out how to crawl…eventually.)

She loves books. I regularly find her with the current one I’m reading in hand, or else taking down my treasures collected from second-hand bookshops over the years, which she knows she’s not supposed to touch, but she handles them so carefully I can hardly object.

To my great consternation, it seems she’s destined to be the class clown one day. She’s already developing a sense of humour and I can spot the makings of a little practical joker. When she laughs, it comes right out of her belly.

Apparently if you combine two introverts, it makes an extrovert – everyone she sees is a potential friend who has to be loudly greeted. It makes taking her to the supermarket a lot of fun, and we leave a string of smiles behind us wherever we go. We’ll be having the “stranger-danger” talk sooner rather than later.

She is at the same time fascinated by creepy crawlies like millipedes and slugs, and the girliest girl you’ll ever come across. A favourite pastime is spreading mom’s jewellery and hair accessories over the bedroom floor, and given the choice she’ll wear a dress. (Ha! Choice. As if she gives us one!)

She picks up her own toys (with some prompting), and complains loudly if we don’t allow her to help with the laundry, the dishes or in the garden. She eats almost anything (which is apparently strange with toddlers), and makes the best imaginary coffee and plastic eggs and sausages I’ve ever tasted.

She is my princess, and the most beautiful girl on Earth, and probably the one woman that will, one day, get me to learn how to dance (cause I’m not passing up the father-daughter dance at her wedding for anything!) 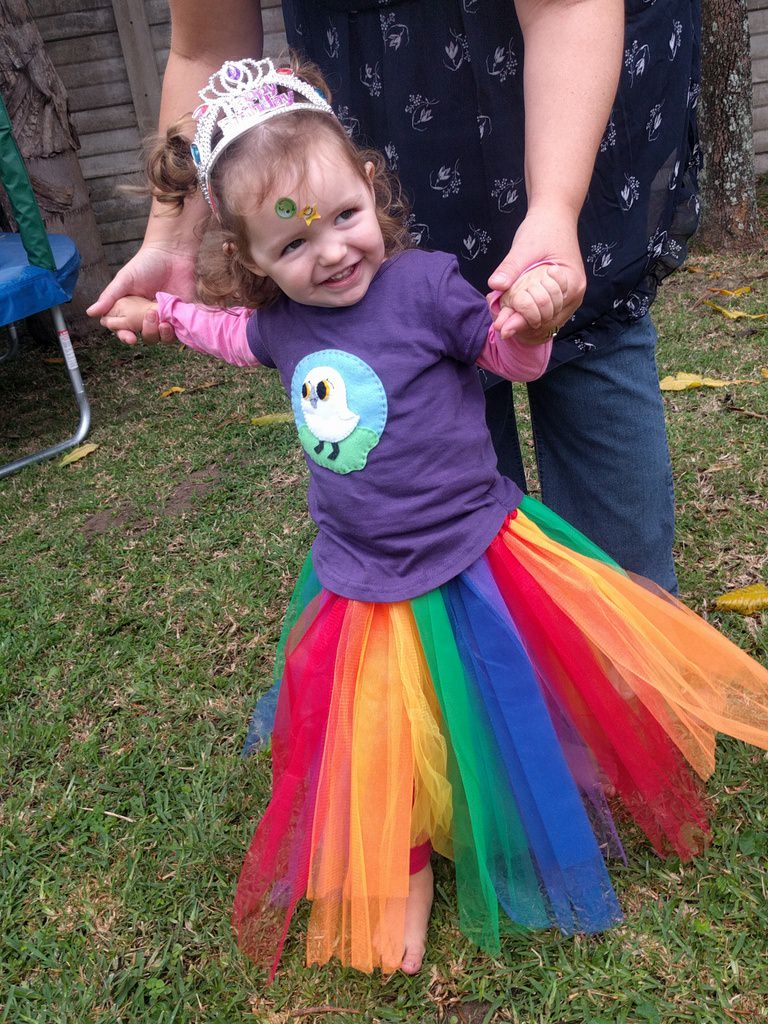 5 thoughts on “The State of the Minion, Birthday Edition”