I might have told this story before but the first words my wife ever spoke to me were to scold me for daring to say I can’t draw – anyone can draw, she loftily asserted, they just need to practice.

She has since seen me attempt to draw, which led to her admitting the error of her ways. Now, if I need a drawing I just tell her what I want, and she makes it happen. You can see the results all over this site. We make a good partnership that way.

But it’s by no means a one-sided partnership. While I can’t draw I’m a very practical person, and when the wife gets magnificent, impractical, Pinterest-inspired ideas, it falls to me to turn concept into reality.

At the moment, all projects are in service of the nursery. Any self-respecting nursery needs a mobile above the crib. It helps with developing an infant’s depth perception for those first few months when they’re spending a lot of time on their backs. And it’s pretty.

The wife decreed we’ll be raising a girly-girl, so as much as I advocated for a mobile featuring Weeping Angels and Daleks besieging a little TARDIS in the centre, we’re going with fairies and flowers. (I’m considering hanging a TARDIS mobile over my desk, though. Who says they’re just for babies?) The wife occupied her evenings while I was in the US a month ago making various items to make up the mobile, and last week I got to building the frame on which to suspend the fruits of her labours.

And even if I say so myself, the final product looks very good.

But then we’ve had practice – we’d already made one for the nephew who arrived in September last year: 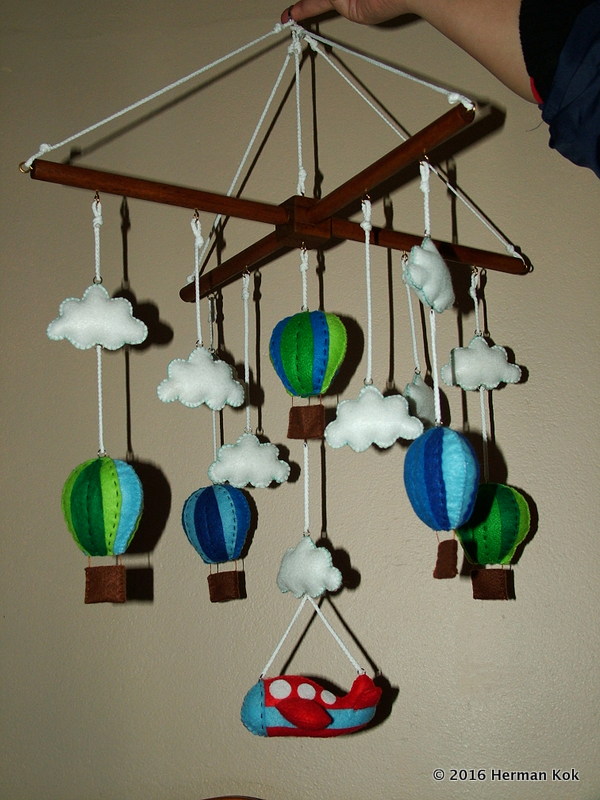 Now the wife is making a duvet and pillow cover set. I’ll post some pics of that when it’s done.

12 thoughts on “Getting crafty”